“King of the Country Western Troubadours” 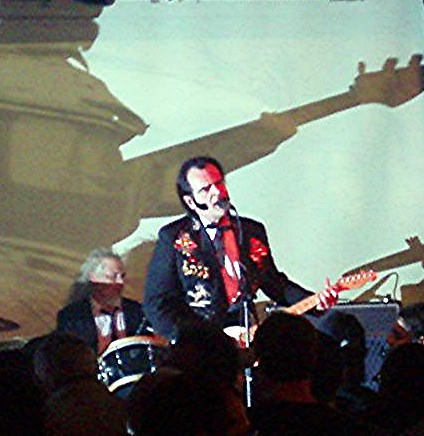 Fake sideburns, gold fangs, a man-servant with a handgun on a pillow,
add a blistering guitarist and it all makes for a memorible set to kick off a weekend.

“Chart-Toppin’ King of Country & Western Troubadours Ordained”
and, most importantly (to him), “God’s Gift to the Womens.”
Oh, and one more thing: Unknown Hinson has previously gone on record as swearing that Hank Williams, Jimi Hendrix and the Beatles downright stole most of their hits from him. “Them boys owe me hundreds!”
Call it:
Psychobilly / Rock / Punk.
Just say “Wow, what an act”.