got on a wiki jag while thinking about flowers . . . 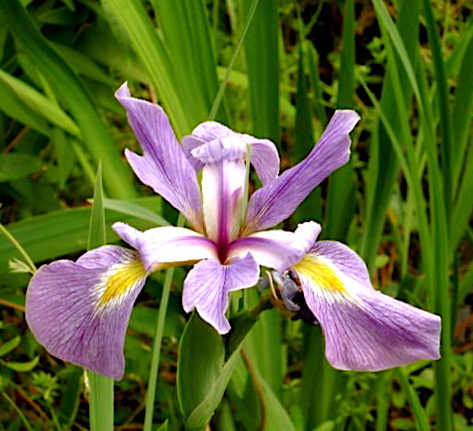 “Green grow the rushes go
The compass points the worker’s home”
– REM, “Green Grow The Rushes”
The word “iris” has three main meanings, related by their derivation from the Greek word for rainbow:
* Iris (mythology), a messenger of the gods in Greek mythology, identified with the rainbow
* Iris (anatomy), the sphincter around the pupil of the eye, named after the colors in human and animal eyes
* Iris (plant), a genus of flowering plants, named after the rainbow

“Irises” is a painting of iris flowers by the Dutch artist Vincent van Gogh.
Van Gogh felt that he could keep himself from going insane by continuing to paint.
“Irises” was the result.
Painted in 1889, it’s on display at the Getty Museum, Los Angeles, California, USA.
Another Iris: Jodie Foster played “Easy Iris”
in the 1976 film “Taxi Driver”.
“You talkin’ to me? Well I’m the only one here.”
– Travis Bickle

my MRI is back from the lab