This Blue Plate Dinner is a rare treat. 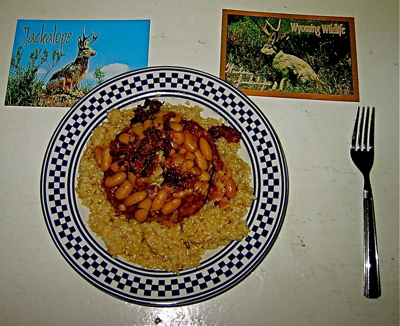 Jackalope was a favorite meal of Dutch Reagan
when he was down on the ranch. 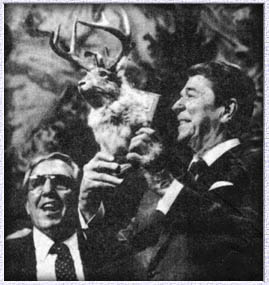 The Jackalope it is a hybrid of the pygmy-deer and a species of killer-rabbit. Reportedly, jackalopes are extremely shy unless approached. It’s also been said that the jackalope can convincingly imitate any sound, including the human voice. It uses this ability to elude pursuers. (Editors note: ever camped next to a babbling brook? same principle.)
Although no jackalope has ever been captured alive, it is said that a jackalope may be caught by putting a flask of whiskey out at night. The jackalope will drink its fill of whiskey, and its intoxication will make it easier to hunt.
It is also legend that the Cherokee Indians would eat these at the end of a vision quest.
Above all, respect the jackalope.

Eat Off the Floor