Driving through Jackson, Georgia on a two-lane blacktop, a random Tuesday, 7:00PM.

We drove past the sign and pile of wood and the BBQ potential didn’t register right away.

When it hit us we hit the brakes, turned around in the driveway of a trucker – his big rig was parked beside his house and it was one of the easiest turn-arounds ever. 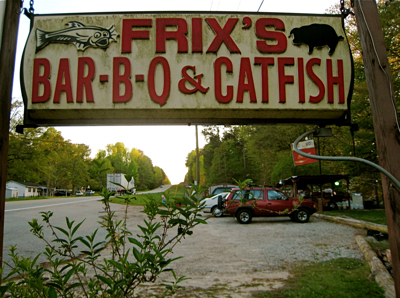 We got there, parked and went in… or tried to go in.

Here’s a first: we had trouble finding the entrance.

The place had more than one door and none of them looked like they’d stay on the hinges if pulled.

Some doors had windows that were painted over. Inside the windows on one door was stuff piled up to the ceiling, I wasn’t about to try opening that one and topple the stack of empty jars, plastic bottles, newspapers, and general whatnots.

When you visit, use the screen door on the far right, the one at an angle facing the woodpile.

Go through the storage porch and wind you way in. 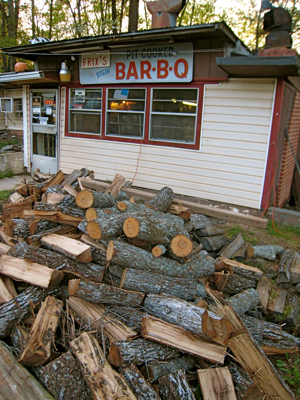 She walked out from around the corner.
The first thing I noticed was her towering size, well over 6 feet tall with very long gray hair in twin pigtails, big ropey pigtails down each side of her head. When she turned around we saw the braids were joined down her back into a single braid. The result was a big ropey wishbone of hair over her threadbare apron.
The second thing we noticed was her unusual speech pattern, a bit lispy and a bit tongue-tied.

I looked around, was alone in the place, except for the woman. When I ordered unsweetened tea she didn’t bat an eye. Good sign. I said I needed to wash up, she told me to come on back. She pointed me to the deep industrial mop sink beside the pit.

They can smoke the meat indoors because they have custom exhaust fans. She said it was her husband’s idea and he built the place for them a few years back “with hith own two hanth, he’th full of ideasth.”

She kept refilling my tea, even when I only needed an inch at the top. She’d put her knee on the bench, rest sideways, pour me a sip of tea and ask if everything was alright. Yep, OK.
She’d walk off, sometimes she’d swing her arms and move along with the radio like a teenager.

She especially liked the Motown, “Bay-Bay, Every-thing’s all-right, Uptight, out of sight!“

She even went in a circle on that tune. She didn’t exactly a spin in a circle, but still, she made a girlish 360.
Generally her attention and floor show might have been annoying but she clearly wanted some companionship and was nice about it, didn’t ask uncomfortable questions, just liked to chat and hear someone talking to create some diversion. She carried her part of the interaction and didn’t push it – even when I bit my lip while chewing and I winced, she noticed from across the room and said, “Oh, ah’m sthorry.” I felt touched by that. Normally my reaction would have been more like,”Cut it out, I don’t need a Mommy,” but she really seemed so kind I wasn’t uncomfortable about so much focus.

“Where you from?” Uh-Oh. She got personal. “Athens.” (I lied but was driving from Athens.) She looked like she knew better. “and Savannah, Beaufort, Charleston…” I started the litany of some “wheres” where I typically claim to live.
“Oh, Savannar,” she said, “My firth huthsband got buried there in 1978. Ah go every year to histh grave. It getsth overgrown and ah weed it. Ah take him hith pecan pie. A whole pie and ah usually have one thslice myself before I leave.”
WTF? “Oh,” I replied, “Oh, I’m so sorry for your loss.” (Standard reply about a death). I wasn’t liking where this was going.
“Yesth, but that wasth a long time ago and now ah got a new huthband. Ah get to see him every thingle Wednesthday and Thursthday now. Ah’ll go to Atlanta tomorrow and thstay until Friday, then hurry back to open the resthaurant by 11.”

… I’m thinking the current husband is in prison… She read my mind, “He’sth in the VA hosthpital. (long pause) He has good daysth and bad daysth.”

My original inkling about her was that she was kind of fun, maybe even a bright spirited person. That hunch matured into a loving trust for her. This was a good woman, working a BBQ joint alone on a Georgia two lane backroad, keeping it together, keeping it going so for two days a week she could get a motel room near the VA hospital and sit with her husband. Until she buried him like her first husband. Then she’d have two graves to visit and clean annually.

Oh, and the food was good too, especially the hush puppies. Crunchy on the outside and corn-mealy on the inside, not at all greasy. She makes a homemade peanut butter pie, it was a bit heavy and too sugary but I told her she’s a great cook. She smiled like it was the best compliment she’d heard in a long long time. . . I was so glad we met. 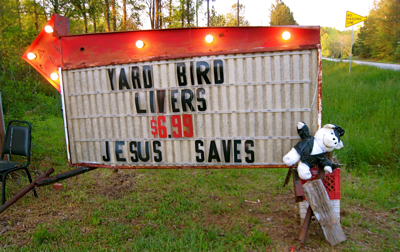