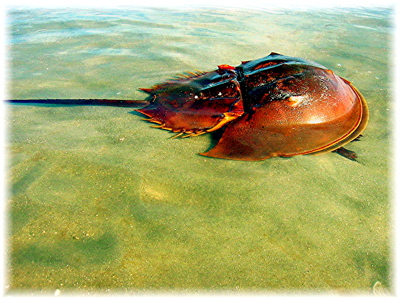 The temperature was the 70s, we went to the beach.
After a swim we sat.
It didn’t take long to find entertainment using a fierce-looking shell in a tidal pool.

1st: Place a 250 million year old living fossil in plain site near a tourist walking area.
2nd: Sit back and watch the reactions as group after group see it near their bare feet.

Fun for hours!
Each group of beachcombers will think they’ve discovered the monster.

Four football throwing boys stopped and dared each other to see if it would move – they moved on without getting too close.

One kid was double-dog-dared to touch it, so he got a long stick and was going to mess with it until another kid pushed him from behind.
He jumped and yelped like a schoolgirl. They played like they were mad at each other, using that distraction as an honorable escape from the horror.

Elderly women warned their men to steer clear!
Either the men agreed & complied or they ignored the warning while suddenly getting interested in something way over there, in the safe viewing zone.

These horseshoe crabs aren’t concerned about having fun on a Sunday afternoon.
They can go a year without eating! Along with cockroaches (& the meek), they shall inherit the earth.

facts:
The Horseshoe Crab has light blue copper-based blood.
They eat at night and burrow for worms and mollusks, feeding with their dozen legs (most with claws).

The eyes have a range of about 3 feet and are used only for locating mates.
Each spring during the high tides of the new and full moons the females arrive by the thousands.
Males, 1/3 the size of females, cluster along the water’s edge as the females arrive.
The male hangs on to the female’s shell and is pulled up the beach to the high tide line.
She pauses every few feet to dig a hole and deposit as many as 20,000 pearly green, birdshot-sized eggs.
He tags along in tow. Smiling, even grinning & giggling, no doubt. You know.

Masks were used from their skeletons back in the days when people wanted a threatening mask.

Next Sunday:
Chapter 2 of Pass Times 101.
“Gluing a Dollar Coin to the Floor; Observations and Techniques. “
Bonton Press, all rights reserved

The Arsenal and Museum