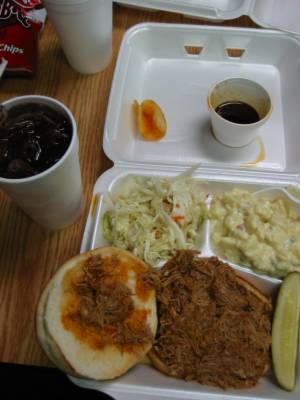 Is it too much to ask for a place named “Smoky” to actually cook their BBQ over a fire? Fire – one of those stone-age elements like earth, wind, & FIRE.
This Q was pretty good crock pot pork but come on and rename your concrete block diner from Smoky Pig to “Crock Pot Pig” and you will have no beef from me (clever wording? or too clever for anyones own good?)

Potato salad – was it bought by the tub from a grocery store?
Cole Slaw – interesting, it was called vinegar cole slaw and that’s all I could taste: vinegar.
To-Go plates – cheap. Never get any repeat customers? Figure everyone is stopping in from the big highway? How serious can a BBQ place be if they serve their BBQ with a plastic fork? Losers!
Another white bread hamburger bun serving as a sponge. I didn’t order a sandwich!
And then the Hot sauce (in that little Styrofoam cup beside the sole potato chip provided by a fellow diner). The “sauce” was interesting and the proprietor sure was proud of how hot it was. I agreed and sweated around my eyes to prove it. Hey Dude – Hot does not equal flavor. Any gonad can make a dish spicy, remember the plethora of pseudo Cajun restaurants a while back? Blackened this and Cajun that meant it was hot hot hot but not not not good cooking. And certainly NOT true Cajun, but that’s another subject.

I know how they make this prideful hot sauce because I’ve done something similar: Get out the crock pot (their only cooking device?) add a bit of vinegar with some dried hot peppers, crock for hours, strain, serve as hot sauce.
Also works well using olive oil for dipping bread, but don’t expect to see any olive oil in these here parts, yah hear?

BTW: we got directions to this place from the National Corvette Museum, which is the bestest Corvette Museum I’ve ever seen.
Decision: This place was right on the mark if you aim low. Move on. No Q to savor here . . .