Below decks aboard the Poseidon II, the Chief Inversion Mate shows how seriously the maritime outfitters take their 1970’s fiction films (and the 2006 do-over).
As you see in this stealth photo, this bilge is ready for a little rollover action. 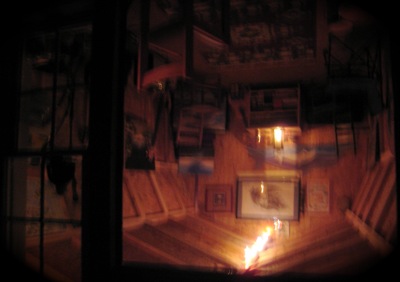 “When the mother of all rogue waves appears abeam and
slams us, then we’ll crawl to the lower decks – they’ll be the top decks after the rollover. Then we’ll be ready for rescue from the waterlogged bowels of the overturned ship. Yep, she’s fine and she’ll earn her pride once her bottom is skyward,” according to the shore-starved Mate-in-Waiting.
Equipped with a reasonably comfortable sitting arrangement, art on the walls, and side table whatnot knick-knacks, the First Class 180 Compartment of the Poseidon II shows she’s in touch with her feminine side.
Yar.
Happy April 1st, 2009.