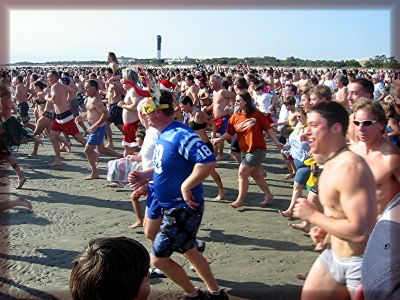 Sullivans Island, SC. 1/1/06
A pleasant day, about 55 degrees, sunny with little wind.
People pay a small amount to a charity to swim together in the Atlantic on New Years day. There was a large turn out due to the nice weather.

The scene changed post-swim, the sun went behind clouds and it got chilly.
It is a polar bear swim but there was no ice involved except in some coolers on the beach. The Wisconsin or Alaska Polar bears would look down their cold noses but hey, we don’t control the weather, snowbirds.

Saw something new to me: some sort of flying Dutchman contraption.
Take an inflatable boat, strap on an ultralite hang-glider-airplane with a two stroke engine and large fan blade for a propeller and risk your life 200 feet above the land and sea. Seats one or two, depending on weight and amount of sense. I imagine you must keep seated and hang on!
There were several buzzing around in the air, really added to the feeling of being in a fun scene.
Reminded me of Black Rock Desert during Burning Man, where you say to yourself “This sure is fun. I might die. Let’s do it again!”

Spring and some annual Wordsworth