we’re on track for one million sets of eyeballs

It’s going to be close, but in the home stretch of the year 2007,
little old bigbonton.org is on track to have been in front of one million sets of eyeballs in 2007.
Freaking unreal! I mean, Mais bien sûr! Maar natuurlijk! Aber natürlich! 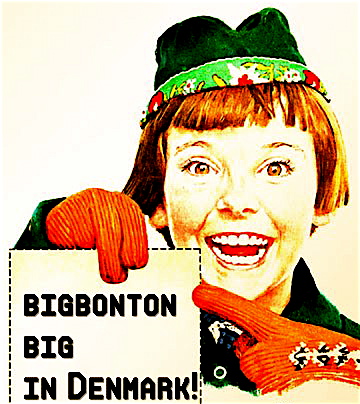 While we are only counting those fans on Planet Earth,
we’re getting the hits aplenty from Denmark, Norway, and Australia. The USA is coming in at #4 on the hits-o-meter.
Whatsa matter Yanks? Can’t read? Playing video games? Eating cheeseburgers and not reading bigbonton.org?
Well, we’re big in Denmark! So there. Go back to your Coca-Cola.
And, by the way, Denmark, …
H-E-L-L-O Denmark!
I’d like to visit. Crash on a few couches, meet the mayors, you know, visit the country.
I make a great guest. I know when to talk and when to listen. I am easy on the eyes and I smell good… well, wait, I don’t smell at all.
Invite me over for a sauna or whatever you folks do. We can be big in Denmark together!
I loves me that netweb! It got me connected to a million other humans in 2007. Wow!
With a lump in my throat, I say in my best Elvis-voice, “Thank you, thank you very much.”
And in the other (80’s) Elvis voice, “What’s so funny ’bout peace love and understanding?”
El bigbonton-o is global and that’s a good thing because bigbonton is too big for any one country.
Next conquest: Alpha Centauri, also known as Rigil Kentaurus.
It’s the brightest star system in the southern constellation of Centaurus. But you knew that.
The Alpha Centaurians will join bigbonton.org in 2008!