there ain’t no flies on me

This is one of the few turkeys to see the sunrise the day after Thanksgiving.
His name is Jake, as in Jake Turkey. More original than naming him Tom.
Turkey Jake has his namesake from an old man with a saggy neck waddle. Human Jake didn’t seem to mind the saggy comparison, although I wonder if he is crying inside or if to him it’s all water off a ducks back or maybe saggy human Jake no longer feels emotions… 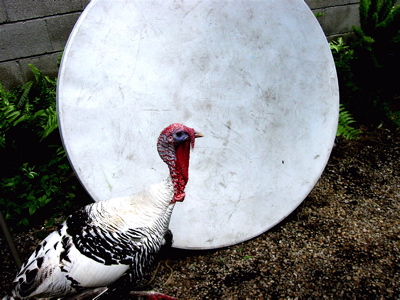 Old gray turkey Jake is old, even by fowl standards. He’s older than most of the human offspring playing in the yard and has outlived all of his fowl contemporaries. Consequently, Jake has been granted a permanent pardon from ever being considered as sustenance. Smart decision for all, especially since this old bird must be one tough old bird to have escaped the dinner preparation neck-ax, survived nightly raccoon raids, and avoided road and farm vehicles up to November 2007.
As a tangible example of an homage to elders, we sent Jake off to the farm. Meaning the real farm, not the “farm” as in that euphemism for the chopping block and then the carving plate. 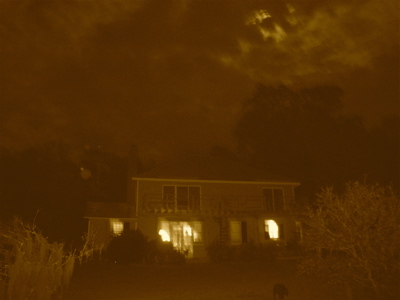 Old Jake has not yet “bought the farm” here.
Look closely and there’s a dog in the bottom right of the photo. She’s a nice Boykin Spaniel, not likely to agitate the old bird.
Jake is more likely to see tomorrow than many of us, especially if we don’t learn to mend our wicked, wicked ways and remember to say “Yessum” to the ladies, and “Yessur” to the men.
Which leads us to:
“Most all the time, the whole year round,
there ain’t no flies on me,
But jest’fore Christmas I’m as good as I kin be! “
Click below for wise insight on
just how to behave “Jest ‘fore Christmas” according to Eugene Field (1850-1895).

“Jest ‘Fore Christmas”
by Eugene Field (1850-1895)
Father calls me William, sister calls me Will,
Mother calls me Willie but the fellers call me Bill!
Mighty glad I ain’t a girl—ruther be a boy,
Without them sashes curls an’ things that’s worn by Fauntleroy!
Love to chawnk green apples an’ go swimmin’ in the lake–
Hate to take the castor-ile they give for belly-ache!
‘Most all the time, the whole year round, there ain’t no flies on me,
But jest’fore Christmas I’m as good as I kin be!
Got a yeller dog named Sport, sick him on the cat.
First thing she knows she doesn’t know where she is at!
Got a clipper sled, an’ when us kids goes out to slide,
‘Long comes the grocery cart, an’ we all hook a ride!
But sometimes when the grocery man is worrited an’ cross,
He reaches at us with his whip, an’ larrups up his hoss,
An’ then I laff an’ holler, “Oh, ye never teched me!”
But jest’fore Christmas I’m as good as I kin be!
Gran’ma says she hopes that when I git to be a man,
I’ll be a missionarer like her oldest brother, Dan,
As was et up by the cannibals that live in Ceylon’s Isle,
Where every prospeck pleases, an’ only man is vile!
But gran’ma she has never been to see a Wild West show,
Nor read the life of Daniel Boone, or else I guess she’d know
That Buff’lo Bill an’ cowboys is good enough for me!
Excep’ jest ‘fore Christmas, when I’m as good as I kin be!
And then old Sport he hangs around, so solemn-like an’ still,
His eyes they seem a-sayin’: “What’s the matter, little Bill?”
The old cat sneaks down off her perch an’ wonders what’s become
Of them two enemies of hern that used to make things hum!
But I am so perlite an’ tend so earnestly to biz,
That mother says to father: “How improved our Willie is!”
But father, havin’ been a boy hisself, suspicions me
When, jest ‘fore Christmas, I’m as good as I kin be!
For Christmas, with its lots an’ lots of candies, cakes an’ toys,
Was made, they say, for proper kids an’ not for naughty boys;
So wash yer face an’ bresh yer hair, an’ mind yer p’s and q’s,
And don’t bust out yer pantaloons, and don’t wear out yer shoes;
Say “Yessum” to the ladies, and “Yessur” to the men,
An’ when they’s company, don’a pass yer plate for pie again;
But, thinkin’ of the things yer’d like to see upon that tree,
Jest ‘fore Christmas be as good as yer kin be!