Remember Bizarro-Land from Superman comics?
It’s a square planet instead of round like Earth. Their planet is named Htrae, which of course is Earth spelled backwards. This was all brought to life by an ingenious duplicator ray built by Lex Luthor using ancient advanced technology. Yes, I said ancient advanced technology.
Admit it if you know it! Superman comics are an item from standard American cultural literacy. Wiki is a good source of info on Bizarro, so if you’re lost on the topic it’s worth a quickie wiki look see. While you’re drinking from the wiki well look up “The Bizarro Jerry”, it’s an episode of Seinfeld.
Bizarro-Land is a place where everything is opposite, something tasty is unpleasant, hot is cold, something pristine and functioning is not as highly esteemed as something broken.
You get it, it’s Bizarro-Land.
Below is a photo from the vortex of Bizarro-Land BBQ.
Where “Just sit down!” means “Welcome.” 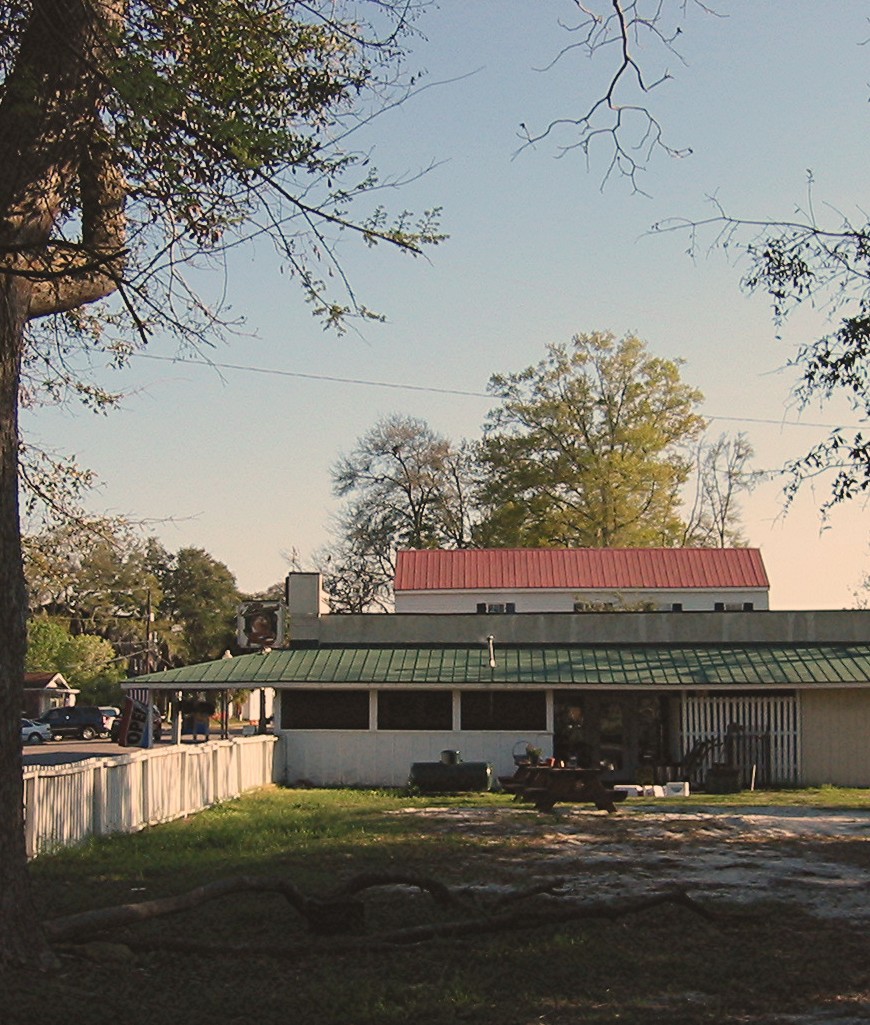 “A Truly Unique Dining Experience” at Bizarro-Land BBQ
We walked in feeling fresh. We’d found the perfect afternoon locale.
We hoped for: a meal, a hang out, and a stroll.
We got: Slow down, Whoa there, not today, boy.
We opened the door, stepped inside and waited for our eyes to adjust from the bright sun to the dark interior. We couldn’t tell who else was inside with us but we knew something was up when we heard a woman hollering “Uh Oh, ya’ll Get Out! Get! Now! Go on, through the door, go!
GET in that back room!”
click for the rest of the story ->

.
.
We turned to have the exit in sight to our left. The woman’s voice came from our right but was still out of sight in the dark. She started to speak in a more pleasant voice,
“Oooh come on in, I wasn’t expecting anyone to come in. I mean, sit down somewheres and we’ll fix you something to eat. And drink. We got our beer and wine license now, you want a beer?”
A waitress appeared along the wall and turned on the house lights.
Now we could figure that the woman doing the hollering was our hostess and one thing she was hollering was a command for a German Shepard to get back into the kitchen.
Apparently the entire restaurant staff had all been taking an afternoon nap in the booths. They’d let the dog into the restaurant for the slumber party.
Order was restored when the lights came on. The hostess, the dog, two waitresses, all were moving to their work stations or blankets.
“What do you want?” the hostess barked.
We tightened up, looked dead eyed into the hostess and said “Pardon?” with a slight fist forming.
The hostess gulped.
She’d been
1/ busted hosting a group nap,
2/ having her pet dog inside an eating establishment,
3/ and now she was getting a stare-down for talking rudely to her customer.
The hostess punted.
“We got our beer and wine license now, you want a beer?”
“No thanks, do you serve BBQ?”
No answer. The hostess darted into the kitchen. The two waitresses flew in right behind her. They could barely be overheard with their hushed voices; but Honcho Hostess was clearly calling the play and the two waitresses responded with energetic “uh-huh” in all the right spots.
We chose a seat near the exit.
Both of the two waitress stepped through the kitchen door in a stiff work posture. Game faced, one walked directly to me and asked, “How was your day, Sir?”
She used the tone of a not-so-good student speaking with their High School Principal. “How was your day, Sir?”
An Eddie Haskell tone of voice for use when trying too hard to “act nice”.
“Pardon?”, we repeated the power word that had rattled the Hostess. It worked again.
The waitress punted.
Next came a waitress tag team maneuver, clearly not their first time to employ it. One waitress darted away and another swooped in to pick it up from there.
“How do you cook the pork?” we asked with a smiling preemptive strike. We were still set on a meal, a hang out, and a stroll. Trying to just chat, order, eat, move on.
Waitress: “Cook the pork?”
“Yes, how?” Seeing her deer-in-the-headlights glaze, we volunteered a few possible answers: “Smoked? Over wood coals? Propane and propane accessories? Crock-potted?”
Waitress: “Uhh, I’ll go get that for you?”
“Get what?”
Waitress: “That. ThAnswer. I’ll go …th’ and … uh “
She scooted into the kitchen.
We sat back and figured the air conditioning was nice, anyway.
The other waitress came over to pick up the fumble. “Smoke it then fire.” She told me, holding me in a smiling eye lock like a Dale Carnage fanatic.
“Smoked? Good, I’ll have a BBQ plate”
Time doesn’t permit a chronology of each disjointed vector encountered while ordering, confirming the order, watching them get the order into the kitchen, getting unsweetened tea, getting a fork to go with the spoon and butter knife place setting, and listening to the hostess brag about their hot sauces. We wanted to sample the sauces but realized we couldn’t. Their six sauce dispensers were set out one per table, so there was a mustard base table, a medium-hot table, a vinegar table, and so on. Hostess rambled on about spices, their sauce making processes, boasted about how “someone” said their sauce was the best “he’d ever had, yep, the best she’d ever had”. Noticing her lack of he-she continuity we did not yield to the temptation to ask if the sauce had turned a “he” into a “she”.
We just giggled about the world around us.
What happens sometimes, are there really warps in our time-space continuum? Does string theory explain it?
One thing happened that was nice, just plain nice.
A construction worker came in straight from the job. He went directly to the waitress stand and asked for one side item, saying “make that beans, please. Beans.” He chatted with one waitress. She may have been his daughter.
After they finished talking, the worker focused over our way and began a survey: “Where do you live?”
We told him something non-committal and short. “New Bontonia, Bontonville, Bontonistan”. Whatever, where was this going anyway?
“Where do you work?” the worker asked. The guy had gotten nowhere with his initial “where” so he was trying again. Second effort! Had to respect that about him.
“Where do you work?”
The reply was “Internet.”, with a gaze to study his reaction to that answer. “Internet.”
Worker gulped a mouthful of beans, spooned up another scoop of beans and said with a wet mouthful, “These beans are so good! – and I can add as much hot sauce as I want – and I’m not supposed to be able to just order a 75 cent side order without a meal but I come in here and get beans – and they sure are sweet.”
And he spooned deeper into the side order of beans and was a very happy camper.
If only we could be as easily fulfilled.
But back to Bizarro reality –
A tourist stuck her head into Bizarro-Land BBQ and very politely asked for directions to a common nearby destination. The Hostess replied “Oh I’m not the one to ask about that.” then turned her back on the tourist and walked away like she’d saved herself some work.
and how was the food?
Does good mean OK at Bizarro-Land BBQ?
Then the food was good!

Saturday is for Q.