Sounds critical to say “Primitive” Baptist but that’s their name.
I think it refers to their belief in basic precepts, a simple core foundation on which to build a life. 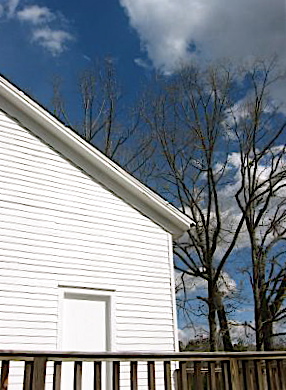 Likely, the builders of this church appreciated their blessings more fully than modern man. Satisfaction of basic human needs comes very easily for us. Good water, fresh produce, a mule – a living tool, and the value in family and community.
Liberty Hill, Georgia is home to some of the most interesting music and most dynamic people the U. S. of A. has ever produced.
This country church sits beside a one-room schoolhouse where my Grandmother learned to read. Both buildings have a foundation of hand stacked rock columns and are now under the stewardship of families in the area, mostly my senior cousins.
In this cemetery rests many of my ancestors. They include
Southern Confederates, New World Colonists, and French Huguenots from the 1600s. Rural Georgia red mud farmers, itinerant musicians, salt of the earth American stock.
So this is an image of the distant future according to those folks.
I think they’d say the trees are bigger now.
We’re living in the future!
Lest We Forget.