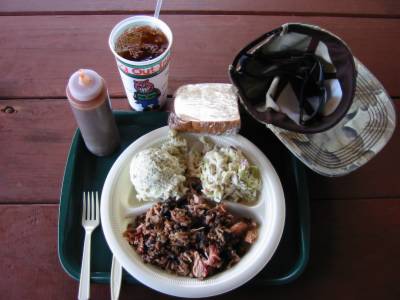 Pig Out Inn
Natchez, Mississippi
601-442-8050 They Ship.
I knew it had potential when I walked by and smelled smoke.
After ordering I sat on the deck at a picnic table by some ladies that were camping along the “Trace”, the Natchez Trace parkway. This place had the kind of overheard conversation that can keep you focused on the table behind you.
The plate arrived, styrofoam with plastic cutlery. In the past I have pooh-poohed the “to-go” disposable serviceware but not now, this BBQ smelled too good for such petty blabbering.
The 1st taste was so good I ran out to the car to unpack my camouflage cap so it could get in the photo too.
BTW: if you want to blend in east of the Mississippi River, wear camouflage. I don’t mean in the woods, works in Wall-Mart or at the gas pumps too. In the west I called this cap my “psycho-cap” because only crazed unibombers care about camouflage unless actively on a hunt, but I’m no longer in the west. I blend in with my psycho-cap.

The Q:
Smoked, tender, hand cut and cleaned of anything but deliciousness.
Twin dollops of cole slaw and potato salad proved that the tastes of cabbage and of potatoes need not be drowned by vinegar or mayonnaise. Delicious!
Tea: sweet but not diabeties inducing.
Note: the white bread wrapped in sticky wrap. It comes in twos in a nod to Noahs Ark.

Best all around, 5 stars *****.
#1 Pig Out Inn Natchez, Mississippi
#2 Memphis Minnies, San Francisco, California.
#3 Corkys, Nashville, Tennessee
#4 TBD (to be determined)
Anyone have any advice on where to go from here, BBQ-wise??

Saturday is for Q.