They don’t make ‘em like that anymore.
For 53 years this place did a booming business from outdoorsmen, highway travelers, and who knows who? 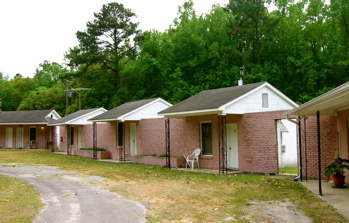 The Edisto Motel had the Edisto Restaurant in the center of their half-loop driveway.
It was known as the best seafood joint around, good enough to have 50 people standing in line on a Saturday night to feast on fresh fried fish, shrimp, and oysters – not that there were many dining options to choose from on this stretch of Hwy 17, but the food and atmosphere was uniquely roadside home cooking. The fish were from the nearby Edisto River, the longest black-water river in the world, which winds from Orangeburg, SC to the sea. Sometimes they’d have eel if anyone is into that . . . eel. I’ll eat it (with sushi) but may not want to catch it or prepare it.
When we dropped in to investigate this old roadhouse we were hoping for a chance to pit-stop for a few nights, but our hopes were dashed when we were told that they weren’t opening again this year. An old woman in the lobby-turned-country-gift-shop turned away from her telephone conversation and said, “It got too old, like so much else around here.” She was talking on a wall mounted rotary dial phone with a 7-foot handset cord. No DTMF (Dual-tone multi-frequency) or wireless radio waves in use around here, they’re kicking it corded, with old school twisty cabling. The lights were out too, but that was just due to a windstorm. The lack of electrical power enhanced the feeling of going back in time to the black & white 1950s.

They’re still doing well with the place, there’s a classiness about it.
Look again, it’s easy to dismiss this as a relic in our modern era of Interstate Highway exits with their chains of Best-Econo-franchise-Lodge-Inn. This place is still quiet, clean, has plenty of privacy, and nice tile details that show pride in the business. Bet it’d be a great place to shower & sleep while on the back roads and rivers in the area. I want a tour of the rooms, they’re actually small cabins made to look like they’re attached.
17102 Ace Basin Pkwy
Hwy 17
Jacksonboro, SC 29452

We have seen Old Faithful.

the buzzards are circling