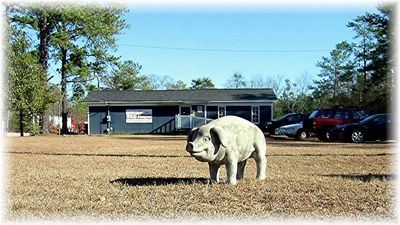 We knew this place was good when we pulled into the parking lot behind a powerline truck, one of those big rigs with a bucket. They got to park anywhere they wanted.

There was a split wood pile on the side of the house so we inspected the premises before going inside. A smoke house is in the back with a big pile of wood waiting to be split after school by the son. This place really is a former residential dwelling, thus the slogan “looks like home, etc”. Any Q joint you see with a tin roofed smoke house in back, well, just go in and hand over your money for a buffet.
Myers specializes in hickory and oak pit cooked BBQ & country cooking. My stomach is growling with fond memories.

The clientele was lunchtime landscaping crew, lineman, a table of “who knows what they do during the day”, and one guy with his female better half. They were making plans, I think it was a honey-do list from her to him. He was going along with anything she said. Maybe she let him have some Q so she could get her way with him. Thank goodness for at least one female in the place, she classed up the joint with her ambition and all that.

Across the street is a large corporate building with a security gate. Whatever they do in there, I’m sure the cubicle dwellers daydream about opening a BBQ place like this one, right off the highway.
They have an all you can eat deal but not an actual buffet, you return to the front for a refill and they lay it on you with a smile. The Q was so good that I forgot about getting some Smoked Chicken! That’s Smoked chicken, not BBQ chicken. Smoked chicken – imagine how tender and tasty that must be. Smoked Turkey is so good, wish I’d had some smoked chicken. . Right now, missing the smoked chicken feels like a greater loss than it did at the time, when I was full-up on 2 plates of Q. My stomach is growling (again).

When I realized I was too full to have the smoked chicken I began a sit down strike. The plan was to digest enough to try a sample of the smoked chicken. Just a mere morsel, a wafer thin slice. We hung out.
Their bulletin board includes many local celebrities, like some blues musicians that look like they’ve had a fairly easy life. After the lunch rush I was the only person in the place. The radio played Elvis singing “Kentucky Rain”. Poor Elvis, he sings:
“I don’t know why you’ve gone,
what you’re running to, or from,
all I know is I want to take you home”.
He rhymes “gone”, “home”, and “from” using an “uh” sound.
Everybody now give me an Elvis Uh-uh-Huh!
Uh-uh-Huh!

There wasn’t much to talk about with the lady that was sweeping up and I think I made her self-conscious when I took a flash photo. She likes Elvis but didn’t want to talk about The King just now, she was sweeping. When I mentioned that today, January 8th, is the Birthday of Elvis she seemed to have had enough, as if it weren’t true.
Well it is true each and every year on January 8th!
So I got a gallon of tea ($4) to-go and left.

God as my witness, I shall return soon and I’ll put a hurting on that smoked chicken, we’re even planning on calling ahead to make sure they put a few yard birds on just for me.