Here’s one of those things that ya drive past,
then ten seconds down the road it clicks and you ask yourself, “What was that!?!”
No other traffic around here, so we did a prompt u-turn.
If we didn’t check this out it might become our first-ever regret. 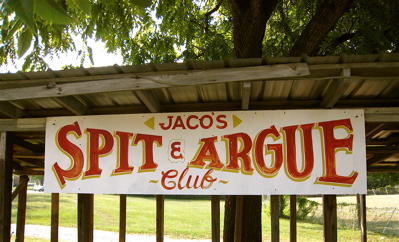 No one was around to ask so we’re not sure what this “point of interest” is all about.
Since it’s within the horizon of Williams-Bryce Stadium,
home of the Fighting Gamecocks of the University of South Carolina (Go ‘Cocks!),
we’re assuming it’s related to SEC (Southeast Conference) college football and also the South Carolina State Fair.
A dog-day in August, a few trees around, some shade, no breeze.
The ground is covered with peanut shells. The wood railing and shelves had a faint bourbon-like scent. The elbow rail was suds stained and “mature”, as in worn smooth and smelling like a warm empty keg. 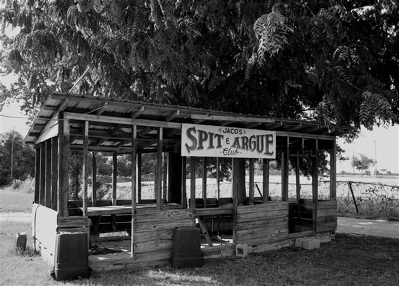 Anyone know of this spot?
Your input is welcome, we’re eager to join in and can participate as well as anyone!
Are we spitters? Yep, as needed. Not habitual spitters, but we keep in practice.
Argumentative? Well, we can be, if that’s what it takes to get a spot at the rail then we’ll just bow-up and start spouting opinions like a campaign stump-meeting wannabe.
Oh, hold on a minute, cool it now – we only spit on the ground and only argue for the cause of “truth, justice, and the American way.”
What might a Jaco sponsored argument be about?
* Politics? – Boring, unless you’re going to get me some o’dat gilded pork barrel funding.
* Chevy vs. Ford? – Nah, we’d just toss a Mini Cooper into the mix & it’d likely dampen the discourse.
* Mustard-based vs. vinegar or ketchup-based sauces? – Heck yeah! Any BBQ topic is worthy of hours spent at a leaning post.

on a cellular modem @ 75MPH