So what?
Maybe we weren’t playing dominoes in Cuba the day Fidel Castro announced he would stand down, but in a turquoise car, with plenty of salt on the rim, and sand on the mini-whitewall tires, who could know whether or not we’re sporting Guayaberas, using an unlit cigar as a conversation prop, while proffering the high stepping fillies a cane juice mojito from our Styrofoam cooler via Dixie cup dipper . . .
Un cuba libre por favor? Nada, compadre, mojito!
The only unknown: reflector shades or jet-black wrap arounds?
Strike out line 1:
My name’s Juan Manure, but you can call me “lover.”
Strike out line 2:
Juan Manure: Can I borrow a quarter?
“What for?”
Juan Manure: I want to call your mother and thank her.
Strike out line 3:
If I could rearrange the alphabet, I’d put U and I together. 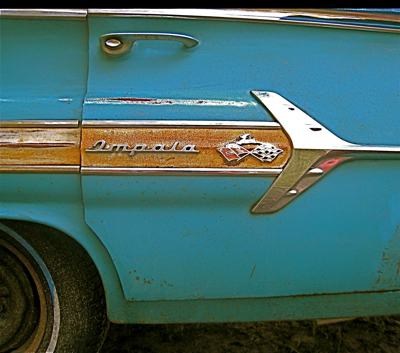 The steering wheel is this big (hold your arms outstretched wide). No head rests, no carpeting, just a bumpy plastic-y black rubber that resembles carpet nubs. The driver has the option of locking the ignition or leaving it able to start without a key.
AM radio, one speaker, with analog (of course) needle dial tuner. The car horn? Nicknamed the “Cuban doorbell”.
The trunk could hold 5 bodies back in the day, but in today’s obesity epidemic USA, make it 3 lard-o’s who have landed on the wrong side of Scarface.
Chevrolet’s chief engineer in the late 1950s defined the Impala as a “prestige car within the reach of the average American citizen.”
This was the best selling car in the USA in the 1960s.
From 1958 until 1966, Chevy sold over 13 million Impalas, more than any other full-size car in the history of the automobile.
Slow and low that is the tempo
Let it flow let yourself go

on a cellular modem @ 75MPH