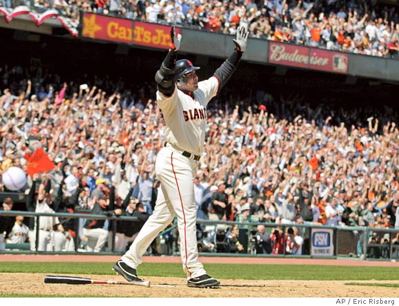 Sample of no-asterisk home run batters:
Hank Aaron’s 755, Babe Ruth’s 714, Willie Mays’s 660, Frank Robinson’s 586, Harmon Killebrew’s 573, Reggie Jackson’s 563
Rumor has it that Barry had been juicing with a then undetectable performance-enhancing steroid called Tetrahydrogestrinone, which BALCO marketed as “the cream” and “the clear.” Coinciding with the timing of the charges, Bonds went up two hat sizes! Know any other 30-plus year old heads that have grown two hat sizes?
Fans this season enjoy booing Bonds each time he comes to bat. Hundreds of asterisk signs (*) have been confiscated at the gates of ballparks, as directed by the Commissioner of Baseball, as any protests of the integrity of the homers would temper the fervor of the record setting.
“Only one player could be voted to start the All-Star Game and be booed in every stadium besides his own. Bonds can divide opinion, even within the same at-bat. He is often booed when he walks to the plate and cheered when he trots around the bases.” – July 9 NY Times
Barry Bonds has made no effort to become less disparaged, he’s the most aloof player in the game – aloof as in cold, remote. Not like a focused and uncomfortably famous Ted Williams, more like a brat of a man that can’t handle his position.
Many fans and the press consider Bonds “a crummy human.” In the early 1990s his divorce proceedings included testimony of Bonds kicking his wife in the *ss. Not the most shocking ever divorce court transcript, but the image stuck, “Star athlete kicks wife in *ss at home.”
Regardless, when he hits it, the ball fires off the bat and rises and rises and when gravity begins to grab a normally hit baseball, his hit is still rising. Up, up, arching, out, away, and eventually the hit begins falling back to earth. You just have to see it to believe it. Everyone in the ballpark floats for a moment along with the white ball.
The San Fran ballpark Splashdown Zone, the round float is a target for the homers.

Kayaks and an inflatable target in San Francisco Bay.
Barry could have made this record* sooner, but so many pitchers walked him with pitch-outs. Go on and pitch to Barry! It won’t really count like a real athletic stat anyway. Let it fly so the fans can float.
Is success with an asterick much of a success?
And in the end, the love you take is equal to the love you make.
The proverb says to “balance your life”, not “juggle your life with BALCO”. The asterick spoiled the fun.

my MRI is back from the lab