“Carolina Moon, keep shining,
Shining on the one who waits for me,
Carolina Moon, I’m pining,
Pining for the place I long to be,
How I’m hoping tonight, you’ll go,
Go to the right window,
Scatter your light, say I’m all right, please do,
Tell her that I’m blue and lonely,
Dreamy Carolina Moon.” 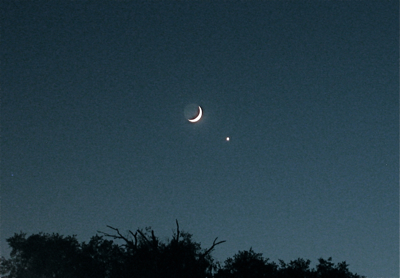 The waning crescent moon and the king of planets, Jupiter.
Jupiter is the biggest planet in our solar system.
This combo looks a lot like the SC state logo, you know, the crescent moon and palmetto tree. A logo that is overdone on belts, lapels, shirts, wallets, golf balls, hats, T-shirts, socks, purses, (let me catch my breath), and bumper stickers, license plates, tattoos, visors, flip flops, crocs, nail appliqués, headbands, and so on… You get the point. Overdone.
Now back to the photo: it’s especially nice to have some land in the foreground. The image uses benefits from two worlds – fine light from a sunrise over the ocean framed by live oaks on a barrier island. Land and sea combined forces to bring you this image.
So “‘Please enjoy properly’ – the Management”
This pre-sunrise moonrise at 5:30 AM occurred on the eve of Earth Day eve April 20, 20009, that’s Four Twenty Oh Nine, 4/20. Took a few trial handheld photos from the dock that were too shaky. Got a tripod, went to the dock, shot a few frames and cropped this result.
Been thinking a lot about a phrase,
“We have a whole river between us.”
It was initially said to mean,
“We have a lot in common.”
A whole river of relevancy. Connections, references made and understood. A flow between here and there, despite distance, without separation of place or needs of the moment
But life gets in the way and good things get pushed aside.
The symbolic river gets a metaphoric logjam.
Both things are true, there is a river between us but the water is wide.
People don’t cross the chasm when it’s all oh so irrelevant anyway.
Another phrase that’s been on repeat in the noggin,
something from scuba and Jacques Cousteau and the Talking Heads:
“There is water at the bottom of the ocean.”
Letting the days go by / let the water hold me down
Letting the days go by / water flowing underground
Into the blue again / after the moneys gone
Once in a lifetime / water flowing underground.
Same as it ever was. Same as it ever was.
Appreciate a unique one-of-a-kind pre-sunrise moonrise at
5:30 AM on the eve of Earth Day eve.
April 20, 2009. 420 2009.
Once in a lifetime!

Sheep in a Manger