Your bigbonton.org operatives at One Infinite Loop (the Apple Inc. HQ) have exclusive proofiness of the next Apple product. Our corporate spies used their iPhones to capture and smuggle these images so bigbonton fans can be the first to see:
The pre-release iPad Nano.
Based on the magical and revolutionary Apple iPad – and now it’s smaller! 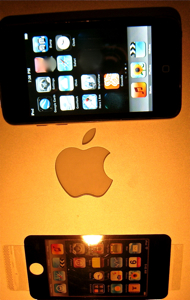 The image above (dated 04/01/2010) shows the actual iPad Nano workbench.
The beta iPad Nano on the bottom of the image (code named “Three-Alarm”) shows the glow of a lithium-ion hotspot due to battery heat within its ultra-compact housing.
The beta iPad Nano on the top of the image (code named “the Chillaxant”) is cool to the touch, even set in its revolutionary “HD-Backlite” mode.
“The Three-Alarm was just too compact,” lamented one of many Apple designers with the scorched cargo shorts to document how hot a battery can get when in-pocket.
One of the first things you’ll notice about the iPad Nano is how thin and light it is.

“Whether you’re coming or going, our iPad Nano responds to a flick, a press, or in parts of the Southern USA, a mash of a button. The iPad Nano is unlike anything you’ve mashed before, standing or sitting.”
– Apple.com website copy (edited for artistic parody)
What makes the iPad nano even better? Accessories!
Here’s an amazing iPad nano holder that’s built into an everyday article of clothing: 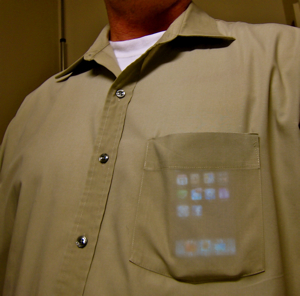 Magically seamless!
God Bless Steve Jobs!
Feb 24, 2010 was the 54th birthday of Steve Jobs.
Hey Steve! I remembered… next year I’ll try to be more prompt in my greetings. Please understand I couldn’t write earlier, had to keep a low profile to protect our bigbonton.org operatives inside One Infinite Loop.
Cool Toys! Cool Tools! Keep ‘em coming.
This post was MADE ON A MAC.
One more time, all together now, “God Bless Steve Jobs!”
Still want to rave on more about Apple and Steve Jobs? Click, you got it.