Recently someone asked about good BBQ in Savannah GA. I mentioned a few places, including Carey Hilliards, which was met with groans.
Well, listen to the tale and you decide . . . 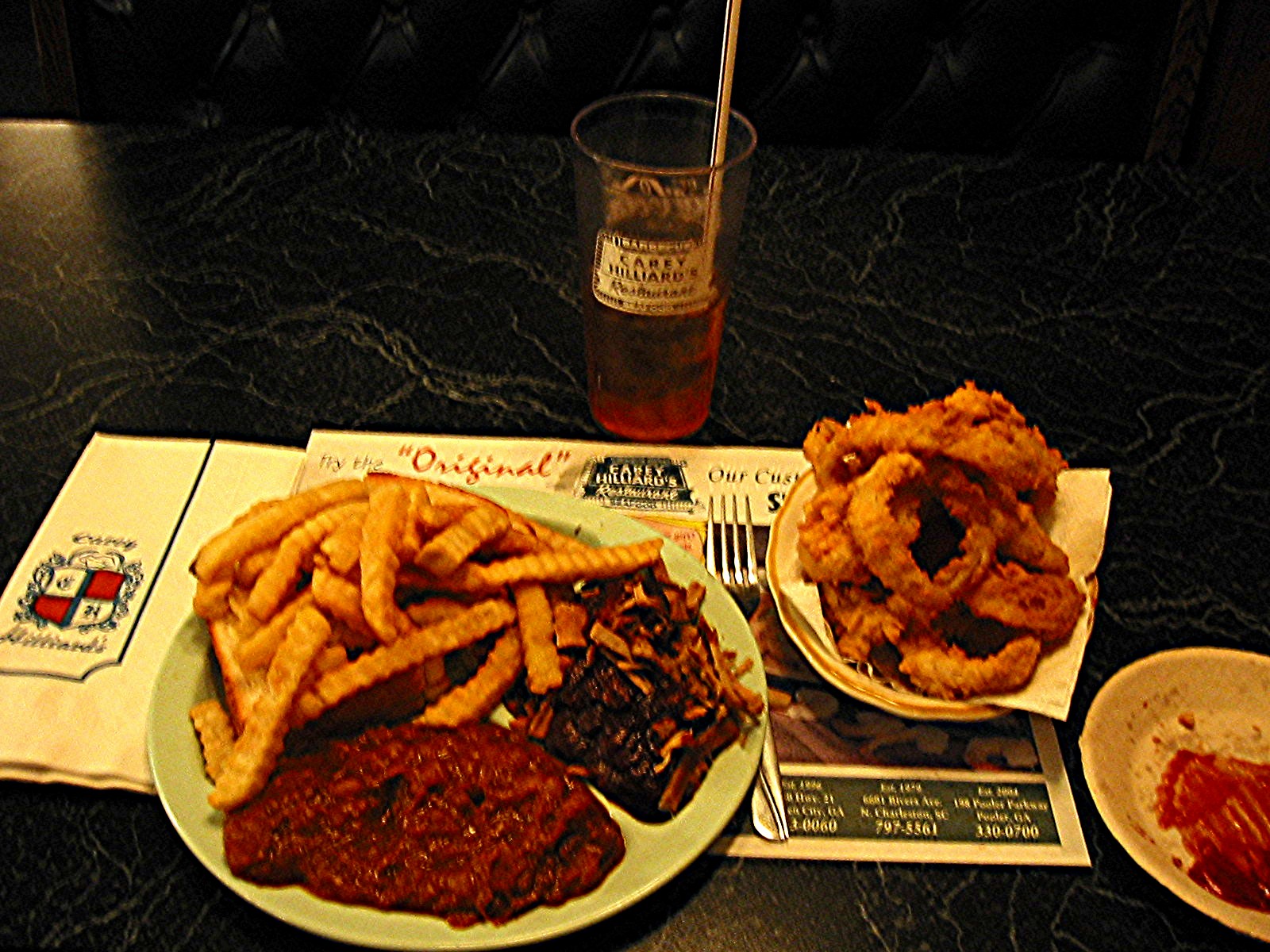 Carey Hilliard’s Barbeque and Seafood.
The BBQ plate is a standard. A dark sauce that’s a hybrid of the mustard / vinegar / and tomato sauces of the region.
The plate is round with 3 sections, one large and two small sections.
The toasted white bread is always cut diagonally. The Q is diced. Brunswick stew or hash is beside the meat, then crinkle cut fries, with one slice of onion and two pickles.
Some onion rings on the side are great.
The tea glass is large but always so filled with ice that it gets drained in one gulp. The waitresses are typically right there with a refill but sometimes they’re elsewhere doing something else. The tea is sweet – if you want unsweet they’ll bring one glass and then let you know that they’re making more. The refill will be sweet tea, if you really want unsweet you’ll have to repeat yourself. Their plastic glass tumbler has Coca Cola on one side and the Carey Hilliards logo (their fluorescent sign) on the other side.
read more, click here

This place has been around since the 1960’s, their latest paper place setting has the date on it (but I don’t have a copy with me).
The seafood is fried or broiled, if you want it other than fried then go somewhere else or plan on spending a few hours while they heat up the broiler.
Nostalgia can have a strong impact on memory and this place can make an emotional tug. They provided meals for the US Coast Guard when we were performing port security or patrols along the Savannah River and Wilmington Sound. We’d come into the air conditioning, chat with the waitress, eat, sign a meal voucher on a clipboard and feel like we were getting a freebie. Recalling being able to just sit down, over-doing the iced tea on a steamy day, recalling how the waitress called me “Hon” or “Sugar”, it’s all one fond thought.
There are about 9 locations for this local chain. One Carey Hilliard’s location is near the Savannah / Hilton Head airport, so when I’d fly back into the area from the BBQ-forsaken west coast I’d often enjoy a 1st stop in Dixieland here.
They always have ceiling fans going full tilt and the AC is going full blast so it’s a cave to retreat to during a Summertime Dog Day – any day in July, August, or September.
Is this one of the great BBQ places? It’s Carey Hilliard’s.
Sometimes just being there is considered enough. There are plenty of folks that consider this a treat to be saved for a birthday or a Friday or Saturday night. But is it great? Well, I see an answer (or a way out of a direct answer). Since you’ll overhear plenty of patrons ordering a fried seafood platter, I can sidestep the “great BBQ?” question and say it is moot because this is a restaurant, not a BBQ joint.
Moral of the story: Call me “Hon” or “Sugar” and I’ll never criticize you, not at all.