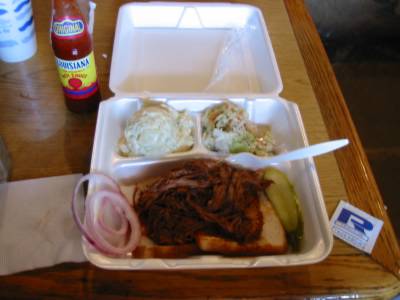 An example of that mid-west style BBQ. Much needed, I was very hungry and needed a place to chill out.
What I got was a to-go plate (ordered “for here”) and a sample of the pulled pork. Was OK, but when is OK really okay?
The Q was fine, sauce was kinda sweet and they had a bottle of store-bought on the table. Served on white bread hamburger bun that was soaked beyond use – maybe it was just a sponge anyway. Best treatment of customer was the wet-nap on the side.
Overall rating: move on, try again in Nashville.

The name of the place was “Sweetwater BBQ of the Ozarks”.
I asked the proprietor for the best route to Nashville. The routes I planned were through National Forests, I wondered if there was a favorite of his and wanted any advice. His answer was “I ain’t been to Nashville since I was a kid, my Deddy took us.” He stooped forward a bit and made a palm-down horizontal motion with his hand, indicating he was a short, small, kid when he last went to Nashville. So I took this to mean he had no idea and could not be expected to know, since Deddy drove.
Looking at the map, St. Louis and Nashville are the closest cities. I guess he sticks near the BBQ place.
Beside the restaurant there was a camper trailer, a big truck, and a black metal cooking contraption. Looked like a retired Army guy living there, splitting wood and smoking the pig.

The best thing about Sweetwater BBQ of the Ozarks was the building, a stone structure that was small and tall. Seemed like a good roadhouse when Route 66 was important. – Oh yeah, it was on Route 66.