We’ve deleted the name of the joint because we got scared about reprisals. But it’s in the ‘boro Georgia.
This place had promise in so many ways. The municipality is named in a blues standard (best known cover is by The Allman Brothers Band). The concrete block building has a sign sponsored by Sunbeam Bread – the gummy white bread of choice for any BBQ plate.
They even have a smokehouse out back.
Perfect. Mouth-wateringly perfectly set scene for a good Q’ing session. Heck, someone else was even PAYING! 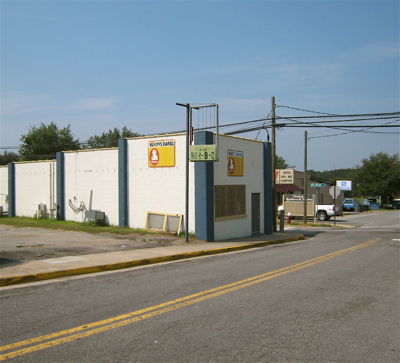 And then . . . our food came.
Look at the photo, the RGB color scheme is not off. It really is a bland shade of orange-grey-blahness. So-so food and luke warm colors.
Busted! We saw the AmeriGas butane tank out back by the smokehouse. Even photo’d it for evidence, but have it filed away in an undisclosed secret location (along with our Vice-President). 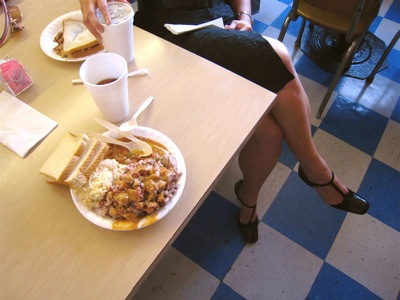 This Q is not Q’d, it is crock-potted pork or some such lameness. Based on the amount of fat left in the meat the crock-pot wasn’t even on the proper settings. Geez Looweez, man, ya gotta have white bread standards when you hang that Sunbeam sign.
What they serve as BBQ is raw material for carnitas.
Order some of their fatty under-cooked pseudo-Q, take it home, cook it in a pot, medium heat, stirring often. The pork will render in its own fat and produce a browned and well-textured pork that’s perfect for a sandwich or as a garnish over a salad.
As for the sides, neither the potato salad nor the Brunswick stew brings back any fond memories. A street survey in the vicinity uncovered such opinions as “this is the best Brunswick stew I’ve ever had.” The follow up probe clarified that “I’ve never had any Brunswick stew from anywhere else,” thus explaining how a forgettable humdrum stew could get such acclaim.
Nothing to see here folks, move along.
All is not lost. The day produced several bigbonton bonuses:
1/ Someone else picked the spot and paid for the excursion (a first).
2/ We actually had a live Female Unit accompaniment (a first).
3/ Check out those legs. Dag, Yo, Daddy-O, we’re on a lucky streak, but not with BBQ! Yowzah, Lucille!
I wants to loves ya, it’s in me and gots to come out!
Selected lyrics from “Statesboro Blues” by Blind Willie McTell:

Well my momma died and left me,
My poppa died and left me,
I aint good looking baby,
but I want someone sweet and kind.
I’m goin to the country, baby do you wanna go?
But if you can’t make it baby, your sister Lucille said she wanna go.
(and I’ll sure take her).