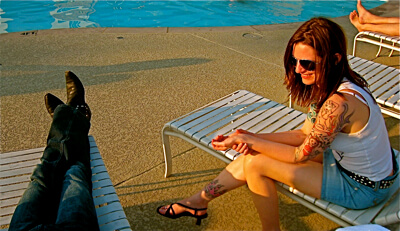 The episode in which we experience a Nashville afternoon.
Everyone looks, guys gaze at the girl, star-struck girls stare without shame at the black boots by the pool alongside everyone’s summer sweetheart of 2008.
Everyone wants her (if they can dream) or at least wants to experience her poolside manner. She relaxes while we get-down to the 6+ hour performance of a traveling German break-dance troop. Just kidding, the epic poolside performance was by my new mental mentor Jeffrey Steele, the 2007 BMI Songwriter of the Year.
You just can’t underestimate the amount of talent in this industry town of Nashville, Tennessee. Music City. 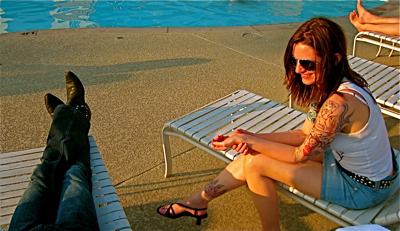 She’s no mess in a dress. She’s poised, perched with her man de jour. Is she prissy? Certains, un peu. Is she pristine? Elle ne l’est pas.
As for him, let’s just say that he’s such a capital “D” Dude that he is regarded as “most likely to cause a cat fight at his own funeral.” Mere mortal males can only aspire…
Ah youth! Wanting to be taken seriously. Such fervent feelings, running deep, as deep as their twenty or so years on planet earth can allow.
Black boots morph into flip-flops, even Croc-clogs. Luckily he can simply change shoes, but she’ll remain tagged as a Honky Tonk woman, inked for the life of her skin – which, thanks to poolside sunshine and gravity will retire and sag south. Explains the plethora of Nashville billboards for laser tattoo removal with taglines like “What Was I Thinking?” and “Things Change, So Can You.”
Before you rant back at me folks, you want ink? Get Inked!
While you’re reading, dig this: YOU KIDS! Stay off my Lawn! You call that music? And dress like you have some respect! Get a haircut! Or you with the buzz cut – let it grow out and part it on the side, be normal!
If anyone (any age) figures out what “normal” means, please advise because while in NashVegas I got clued in that “Things Change, So Can I,” and everyone wants so desperately to be normal… just a regular guy like the Songwriter of the Year and the Dude with the Tootsie with the Honky Tonkin’ ‘tude.
Don’t bury me ‘cause I ain’t dead yet.