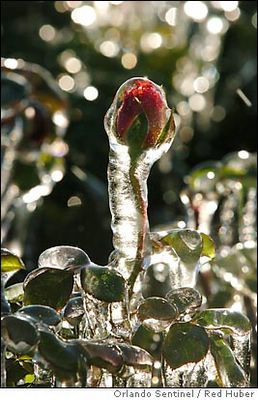 It may seem counter intuitive but the best way to protect a rose in freezing weather is to encase it in ice.

Some people use counter intuitive interactions
in their inter-personal relationships.
———————————————————-
Woman jailed for ripping off lover’s testicle
LONDON (Reuters) – A woman has been sentenced to two and a half years in jail for ripping off her ex-lover’s testicle with her bare hands during a drunken brawl after he refused her sex.
Amanda M., 24, flew into a rage after Geoffrey J., 37, who had ended their long-term relationship, rejected her advances.
Amanda grabbed him by the genitals, tearing off his left testicle, then hid it in her mouth before a friend of Geoffrey handed it back to him saying “that’s yours”.

[it’s not clear why a friend of Geoffrey was so conveniently located]
———————————————————-
Man Held in Chat-Room Effort at a Mass Suicide
GRANTS PASS, Ore., (AP) – A man used an Internet chat room to try to arrange a mass suicide on Valentine’s Day involving more than two dozen women across the United States and Canada, the authorities say.
The man, Gerald K., 26, was arrested at his mother’s mobile home and has been charged with solicitation to commit murder. The chat-room participants planned to log in on Valentine’s Day and commit suicide while keeping in touch over the Internet. Investigators say the total number who planned to do so was 32.
———————————————————-
“Anyone in a new relationship should not be allowed out in public,” said Liz Tuccillo, a co-author of “He’s Just Not That Into You,” a best-selling dating advice book.
“Sometimes people in couples don’t think,” she said.
———————————————————-
“Happy Loving Couples”
You know what I mean
Happy loving couples
In matching lamb turtle-neck sweaters
Reading Ideal Homes magazine
Yeah!

Wanna be, wanna really be what my friends pretend to be
Be it in my own good time
Being kind to myself till I become
one of two of a kind