(didn’t) eat in a train car

$6.95 All You can Eat Buffet
Eat in a train car!
(But it turned into a circus train.)
Somewhere beside the train tracks with weeds growing up through the railroad ties. 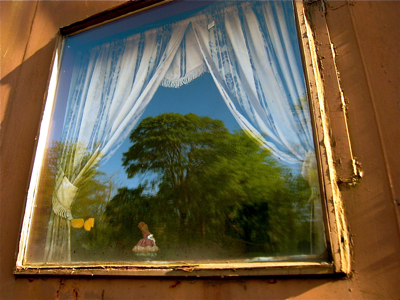 Before we went inside we saw the first old person using a medical walker, she was slow, old and infirm. Her husband let her out of the car at the train car restaurant entrance. Once she had fully disembarked from the vehicle (five long minutes) she stood at the handi-ramp while her husband parked the Ford Fairlane. She just stood and waited for him and he came around and walked beside her and held the door. It was the healthiest thing we’d see for the next ten minutes.
Inside in a booth along the far wall was an old farm couple, we knew they were a farm couple because everyone else was and he wore overalls. We wondered if they liked the all-you-can-eat boiled vegetables from the buffet. The farmer man had his arm cut off below the elbow. Maybe from a farm accident? How long ago was the accident? How did he get to the hospital? Did they amputate it on the farm and say “We don’t need no fancy book learning Doctor, we country folk can survive.” We walked past and overheard his farm wife saying with a tired tone, “for better or for worse,” – no kidding, she was saying that. How many times does THAT marriage vow get worked into a conversation, especially when it applies to the exact thought of a passerby? We were wondering how that lost limb had impacted their lives together.
At the $6.95 All You can Eat Buffet walk-up counter there were two old folks using medical walkers. Make that trying to use walkers, they were clanging together, muttering tiny “oh my’s” and each one waiting for the other to do something right and solve their tangled dilemma. This never happens at home when they sit and stare at the TV. They seemed like they were together but it also seems like they’d be better synchronized if they were together.
Tried not to be juvenile and impatient, but… we couldn’t stay, headed for the door. On the way out we passed the circus fat lady, and we’re not being mean, but she could sell tickets to the sight of her girth. She took up two chairs and spilled over the edges. Did the place notice her when she arrived? What engineering did it take for her to be seated on her two chairs? Couldn’t help but peek at the chair placement strategy, there was a two foot gap between chairs. For air?
Her husband, the husband of the circus fat lady, was addressing one of their three kids. The middle kid, a boy, was getting dressed down, the oldest, a girl, looked resigned, despaired and void of emotion. The youngest (Boy? Girl? WTF?) stared and drooled, barely moving, an odd stillness for a young kid. But the middle child! Not yet beaten down but it’s coming, energy and life will drain from a little boy when Pop has a sneer like Popeye (pulled face, one eye winking closed) and is saying in an angry tense stage threat, “Dat kinda leg kickin’ gonna get yo butt tow up” while glaring with that one open hot eyeball. Pop communicates with heat & hate. The middle child little boy licked at his fork, smiling an embarrassed “see if I care” smile, without having any escape or even a point of reference to know there was any escape. This wasn’t what he signed up for before being born. His poor, poor life.
After we escaped to the parking lot we had to admit the fried chicken looked good, really crispy, but we couldn’t bear to reenter even for a to-go order. Anyhow, what’s the sense of getting a to-go from a $6.95 All You can Eat Buffet? That’s crazy.
“Life’s but a walking shadow, a poor player
That struts and frets his hour upon the stage
And then is heard no more: it is a tale
Told by an idiot, full of sound and fury,
Signifying nothing.”
– Macbeth’s soliloquy in act 5, scene 5.
And down the road we went.