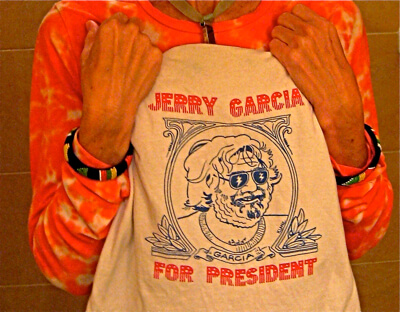 Vote Early.
If in Chicago, vote often.
Q: What was the last Presidential election in which Jerry Garcia was the non-leader leader?
A: Answer below
You’re in good hands with Jerry.

Some may write-in such long-shot fringe candidates as Mickey Mouse, Pat Paulson, even the South Carolina native son Steven Colbert, but for us,
“In Dead We Trust”. 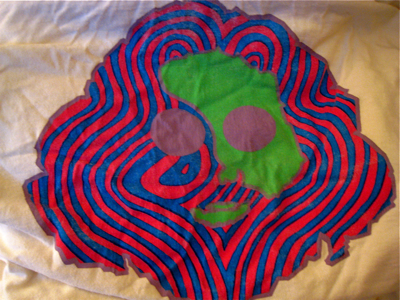 Only Jerry Garcia has the vision to lead us through these days.
Remember his foreign affairs trip to Egypt? Huge applause, shouts of acclaim.
Proof that his constituency will literally follow him to the corners of the globe. 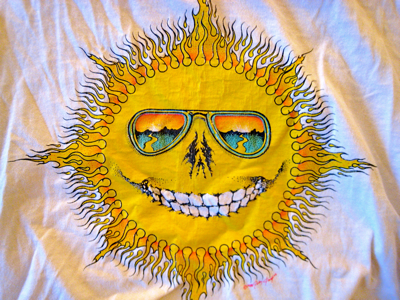 Go with a Cabinet like no other:
Dept. of Interior – Tennessee Jed
Dept. of Transportation / Homeland Security – Casey Jones
Dept. of State – Jack Straw from Wichita
Dept. of Labor – Black Peter
Dept. of Treasury – Big Boss Man
Make a selection that suits you, everyone is represented here at the makeshift table (a hotel room bed): 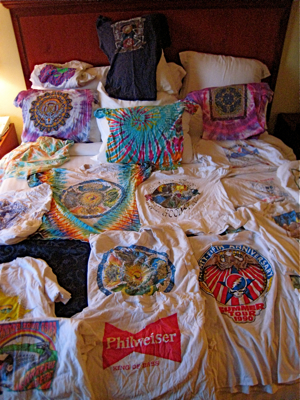 And the answer to the above question, the last election in which Jerry Garcia was the non-leader leader was 1992, when Bill Clinton won. Did Jerry and Bill conspire to get the vote of the Dead? Not in a Chicago sort of way…
Where Pennsylvania Avenue intersects Shakedown Street:
“I’m Uncle Sam / That’s who I am
Been hidin’ out / in a rock-and-roll band
Shake the hand / that shook the hand
Of P.T. Barnum / and Charlie Chan
– Robert Hunter, “U.S. Blues”

Stalling before crossing the Salt Flats

The Best Pool Ever. Ever!