The 2007 Holiday Refuge Camp was held on Grand Isle de Bontonia.
The refugees arrived resembling pitiable huddled masses, showing a bit of embarrassment, not sure if they should be here, but sure they must look like losers for not having anything better to do for xmas-07 and New Years.
(BTW, it was xmas this year and that unholy name will continue until a decent Christmas occurs.)
Hiding nervousness behind their obvious efforts to show a love of the salt water, stinking of effort to be bohemian, and posturing of their “special calling of respite” that made them decide to seek comfort and joy with pseudo-strangers instead of staying close to the home and hearth, the Atlantis noobs parked their cars, stowed their keys, and might as well have shaved their heads. Their “Uh-Oh!” was obvious when they heard pre-launch, “All your hearts and minds belong to bigbonton for the duration. Fasten your personal floatation device. It’s going to be an unpredictable crossing. Let’s go for a ride.” 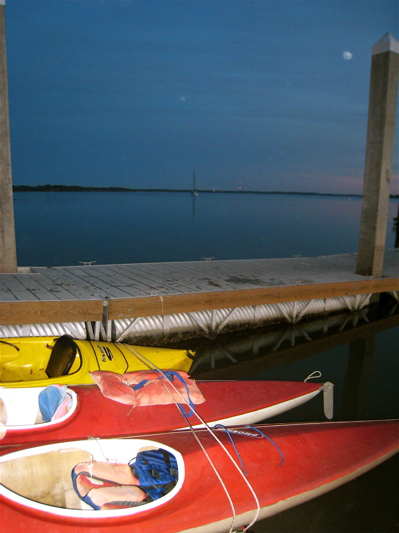 Stow the load and shove off.
Wind power and upper body strength drove us across the deep channel, through the winding creeks, and into a tidal enclave untouched by Santa or Satan.
Welcome ashore! The Grand Isle de Bontonia, a rest stop for the weary, a home to the transient, and a release for the over-pulled. Where you don’t have to shoot out the streetlights to see the stars.
One noob brought 7 DVDs for her personal Johnnie Depp film fest, which went fine until her laptop batteries were spent by day two. (By that time she had come out of her shell.)
The holiday tribe went through typical phases in their social interactions, including introversion morphing into friskiness, feelings of wonderment and attraction, being sized up, and addressing probing questions with answers like:
“Well, because someone has to live happily ever after.” “Just lucky, I guess.” “Never too late to have a happy childhood.” And “Why spoil my great lifestyle?” 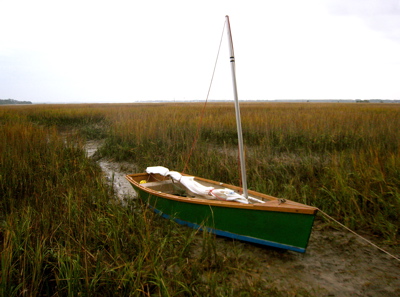 La Replenishment Bateau.
Always a welcomed sight, especially after a few days off the grid. Seeing her sail meant fresh supplies are near. Some days she brought treats like chicken necks (just add salt water and they transform into crabs), chapstick, and the occasional peanut butter and jellyfish sandwich.
Every Femme Tourista wants to score with her outfitter, a common travel condition known as the “Tarzan-Jane Syndrome”.
No one actually called anyone else Tarzan, but daily aliases like Buck Stagg and Marlin Spike showed attempts at playfully pairing-off.
She said, “What’s your sign?”
I said, “Aquarium.”
We had a whale of a time.
Presented her a bouquet of flounders.
I made her dinner.
I made her dance.
And what did I get for my trouble? Crabs!
Really, Blue Crabs, plenty of ‘em. Caught, cooked, shelled and finger fed with salty giggles. Holiday tidings inside us and beside us. 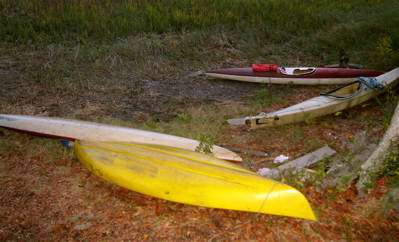 Parking Lot at Low Tide.
The weather was so fine, 70s/ daytime and 50s/ nights. When that changed we had to suffer a breakup and endure the cold hard facts of life: winter comes, even on the Isle of Bontonia.
The first days after arrival, with all that inherent nervous posturing, shyness, and wondering how this was going to play out, now seems so long ago. What was strange and foreign became comfortable, as familiar as your tongue touching your teeth. For a while we could almost take comfort and joy for granted, or at least feel like it was real and would last. 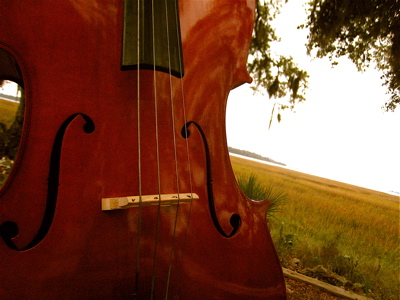 The Holiday Cello, Strung Like a Guitar.
It feels like the last night of 2007 Holiday Refuge Camp never actually came. But the calendar and the weather have both changed, so again Son Volt sings their refrain, “We’re all living proof that nothing lasts.”
January 1st, 2008.
1) Sunrise swim / polar bear salt water baptism.
2) Reborn.
A new day, new winter, new time, new beginner. Hello melancholy, something good ended. But now we have the chance to begin again; do it our way, like we like it, skipping some of the “figuring it out” dance.
Oh, who am I kidding. A good thing is over, paradise lost, that’s sad, and we are forever figuring it out.
::
::
::
Click here for some sampled lyrics to the 1980’s song by Kip Addotta, “Wet Dream”

. :Kip Addotta – Wet Dream : .
I was driving in downtown Atlantis
My Barracuda was in the shop, so I was in a rented Stingray, and it was overheating
So I pulled into a Shell station
They said I’d blown a seal
I said, “Fix the damn thing and leave my private life out of it, okay
pal?”
While they were doing that I walked over to a place called the oyster
bar — a real dive
But I knew the owner, he used to play for the Dolphins
I said, “Hi, Gil!!!”
You hafta yell, he’s hard of herring
Fact is, he was barely keeping his head below water
Well, New Years Eve the island was crowded
We were packed in like sardines
We were all here to listen to the big band sounds of Tommy Dorsal Orchestra — what sole
Tommy was rockin’ the place with his hit tuna — “Salmon Chanted
Evening”
And the stage was surrounded by screaming groupers there to see the bass player
this cute little yellowtail
she said things I just couldn’t fathom
She was too deep, and seemed to be under a lot of pressure
Boy, could she drink
She drank like a… she drank A LOT…
I said, “What’s your sign?”
She said, “Aquarium”
I said, “GREAT!!! Let’s get tanked!”
I invited her up to my place for a little midnight bait
I said, “C’mon baby, it’ll only take a few minnows”
She threw me that same old line
“Not tonight — I got a haddock”